Archipel combines music and drawing in a unique show.

It is a dreamlike initiatory journey. A man finds himself embarking on a strange odyssey that takes him to microscopic islands. On this journey, he will be confronted with past events that are eating away at his heart and will try to free himself from those.

On stage, five musicians will perform compositions oscillating between folk, world music and jazz, while a cartoonist will perform a graphic and plastic performance, thus deploying an insular universe made of sounds and images. The story unfolds as a many-faced musical comic strip.

The islands the hero will discover on his journey are deserted and forgotten by civilization. Devoid of any culture, Archipel offers them an imaginary folklore, both graphic and musical. The audience is invited to enter the universe of each of those. At no time is the continuity of this extraordinary and moving journey interrupted. 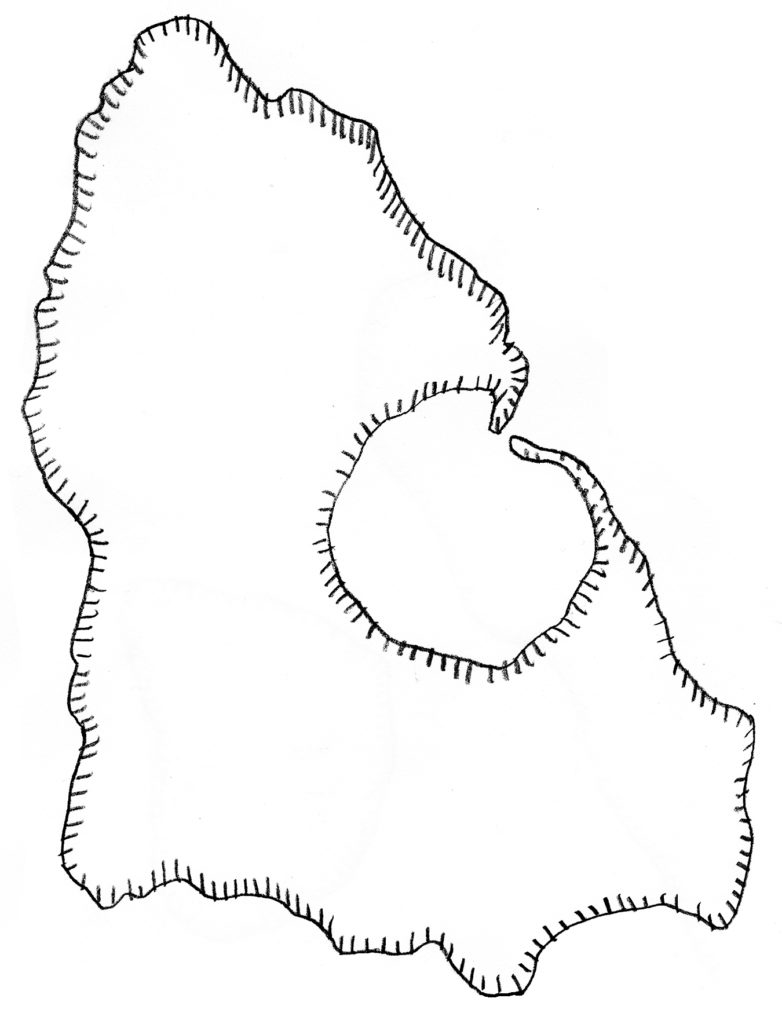 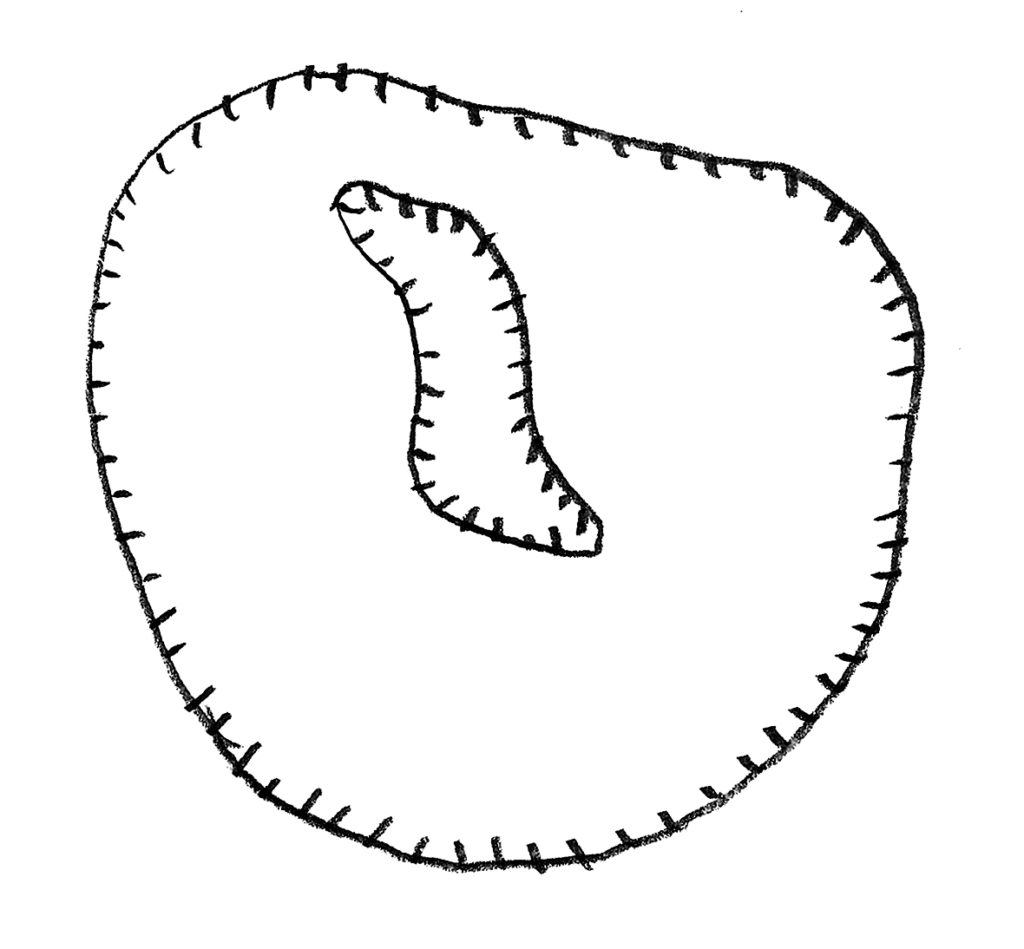 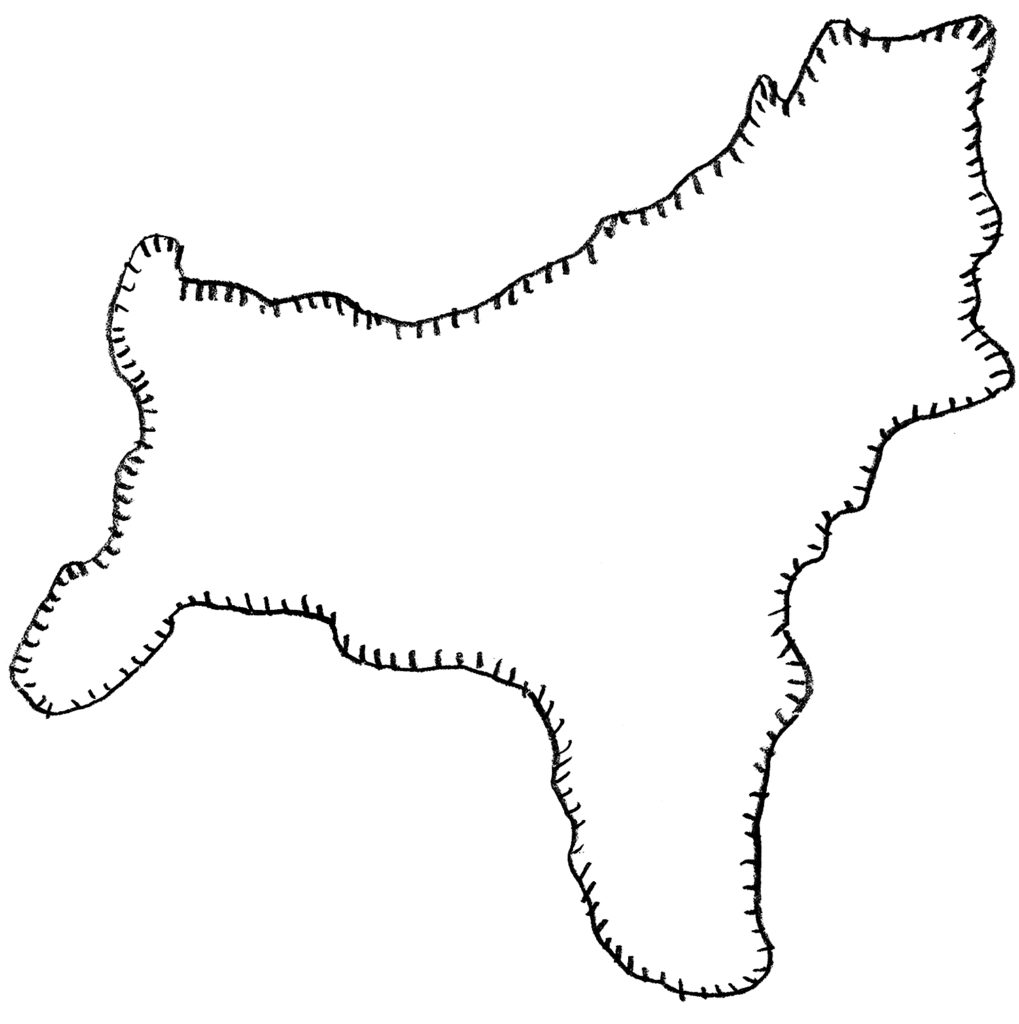 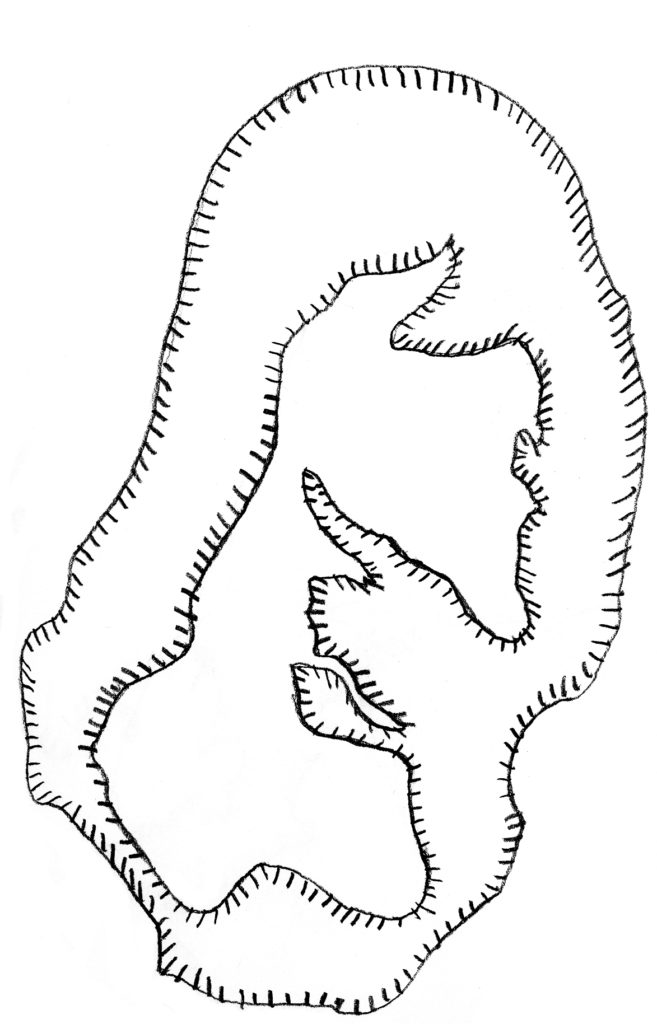 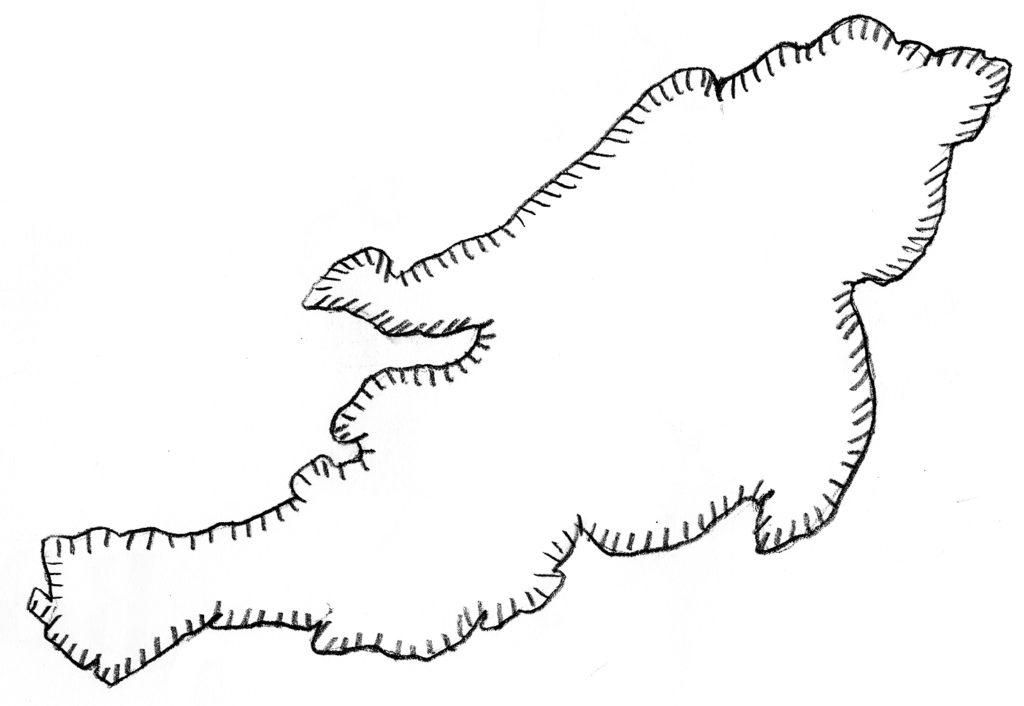 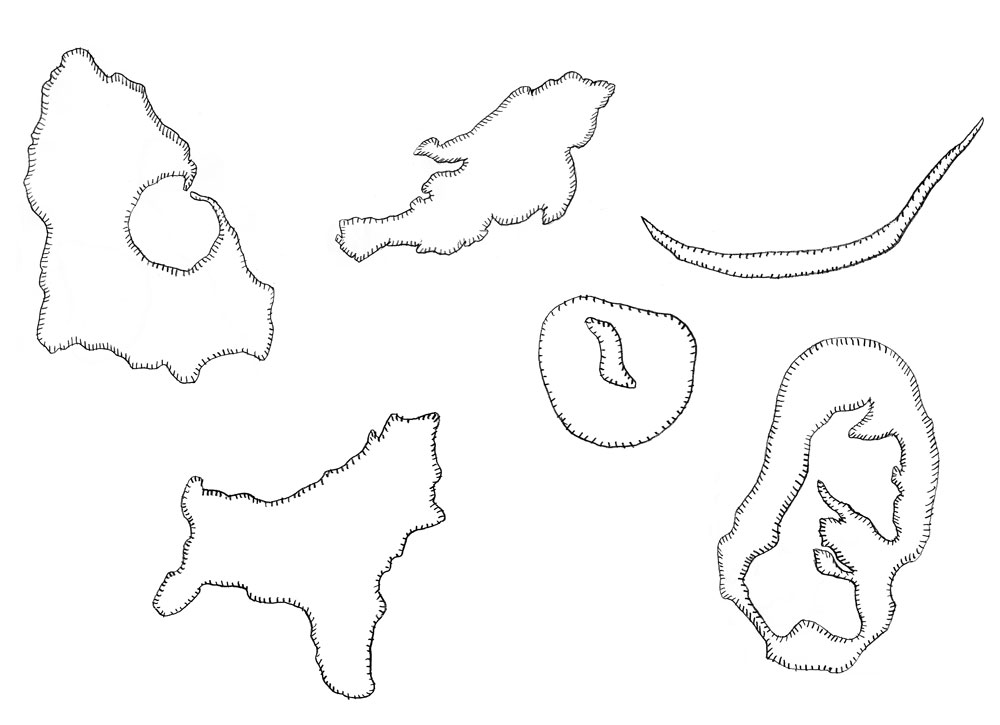 Emmanuel Tête was born in France in 1973. He works and lives in Brussels. Through his commitment to the practice of painting and drawing, he provides a transposition of daily life into dreams where humour, poetry and protest merrily combine to deconstruct the world. Maintaining balance like a tightrope walker with dream on one side and reality on the other, he crafts a multi-resonant universe in which tenderness mixes with irony and the usual meets the extraordinary. There, lonely figures suggest interiority, opening the door to the emergence of poetic moments.

He has been a teacher at the painting workshop of the Académie d’Uccle since 2018. He is a founding member of Buktapaktop since 2013. He exhibits and performs:

Frédéric Lepaffe was born in Brussels in 1986. Self-taught, he took his first steps in French chanson as a guitarist-singer with l’Arche Essentielle, where he set his father’s poetry to music.

As a true all-rounder, he developed a particular interest in rhythm and percussion, both acoustic and electronic. He has performed for many years on the Brussels scene in groups with a wide variety of influences such as electro, jazz, French chanson, pop, African music, … He was also hired as a composer for theatre plays and created the music for the trailer of the RICA festival, entirely recorded in body clapping.

He started to imagine the Archipel project in 2016 alongside Charles-Henry Boland. During bouts of sleeplessness, he started exploring world maps only to discover a range of little-known islands hardly touched by human life, for which he set out to create their musical folklore.

In addition to his work as a musician, Frédéric has been leading musical awakening workshops at the Jeunesses Musicales de Bruxelles since 2010 and has been a music teacher at the Singelijn inclusive active pedagogy school since 2019.

He holds a bachelor’s degree in photography from INRACI in 2009 and likes to mix image and sound.

Julien Gillain was born in 1993 in Liège. He has been going to music school from a very young age, being taught first in classical music, and then in jazz.

At 18, he went to Benin for four months to teach music. One year later, he was admitted to the Brussels Royal Conservatory in piano and violin (jazz section). There he obtained his Bachelor’s degree in both instruments in 2015 and his Master’s degree in 2017 with great distinction and the PalyRight+ prize awarded by faculty.

He performs in various European countries and in Brussels in particular, in various projects on piano and violin, but also on the Hammond organ.

Beyond concerts, Julien Gillain has been working as a jazz piano and jazz violin teacher at the Marcel Désiron music school in Amay since 2017, and at the Jette music school since 2018.

Fanny Perche was born in Lille, France in 1990. She began her musical itinerary at the Lille Conservatory at the age of 7. She started with violin but quicky switches to saxophone in Yves Tanguy’s class.

Having obtained her D.N.O.P (national diploma of professional orientation) in classical saxophone, she enters in 2012 the Royal Conservatory of Brussels in jazz section and studies with Fabrice Alleman, Stéphane Mercier, Manuel Hermia, Arnould Massart, Jean-Louis Rassinfosse, and many others. In 2013, Fanny goes to New York for three months to study with great jazz masters such as Bob Mover and Tivon Pennicott.

Today she holds a Master’s degree in jazz saxophone from the Royal Conservatory of Brussels. Fanny performs regularly on the Belgian jazz scene in various formations, several of which in collaboration with pianist Julien Gillain.

In addition to her activity as a musician, Fanny also works in event management and the organisation of concerts throughout Belgium and France.

Boris Schmidt was born in Luxembourg in 1983 and began playing music at the age of 7. After making his debut on saxophone and piano, Boris started playing the electric bass in 1999 as a self-taught musician and then the upright bass in 2002.

He continued to learn this instrument by enrolling at the Royal Conservatory in The Hague (Netherlands) and obtained his bachelor’s degree in 2007.

He is now very active as a jazz bass player in the Benelux, but has also recorded and travelled with the Grammy-nominated baroque music group “l’Arpeggiata” for about a dozen years and has performed in the most prestigious venues such as the Walt Disney Concert Hall in Los Angeles, the Wigmore Hall in London and the Carnegie Hall in New York.

After 25 albums as a sideman his first opus as a leader and composer entitled ‘Now’ was released on Homerecords in 2018.

Among the many musicians that Boris has had the chance to accompany are: Didier Lockwood, Randy Brecker, Felix Simtaine, Steve Houben, Philippe Jaroussky, Avi Avital, Barbara Fortuna and many others.

Originally from Namur, Belgium, Guillaume Malempré, 21, started playing percussions at the age of 5. Son of the musician Marc Malempré, he grew up in an musical environment. It is with his percussionist brother, Frédéric Malempré, that he envisions a professional future as a drummer. He played his first concerts at the age of ten.

In September 2014, he was admitted to the Royal Conservatory of Brussels where he is still enrolled. This was the opportunity to meet the pros: Thierry Gutman, Thomas Grimmonprez, Michel Hatzigeorgiu, Jean-Louis Rasinfosse, Arnould Massart, Manu Hermia, …

The Oakstreet Trio gave him the opportunity to play in emblematic jazz venues such as the Brussels Jazz Marathon, the Sounds Jazz Club, the Chat-Pitre, the Blues-Sphere and this summer 2017, at the Gaume Jazz Festival.

Charles-Henry Boland studied musicology and philosophy at the Université Libre de Bruxelles, two courses which he will complete in 2012 with a dissertation on the Liège composer Désiré Pâque and in 2013 with a research on the notion of space in musical phenomenology.

Between 2012 and 2018, he is hired by Bozar to write introductions to concerts for the audience. In 2016, he joins the team of pedagogical contributors at La Monnaie. The same year, he is hired by Outhere Music (music publisher and producer) in the digital distribution division, a job he now works fulltime.

In 2017, he took over the direction of Voces Madrigalis, a vocal ensemble dedicated to music from the late 16th to early 17th century. He also works with theatre companies as a vocal coach and musical arranger (Cie Les Étrangers, Reflets d’un banquet, December 2015 at the Théâtre de la Vie / Le Groupe Sanguin, Plot Your City, March 2016 at Atelier 210 and Mare Nostrum, January 2019 at the Théâtre de la Vie).

Very present in the conception of the show since its beginnings, he brings an essential perspective to the scenography and creates the link between music and story by giving Archipel its narrative dimension.